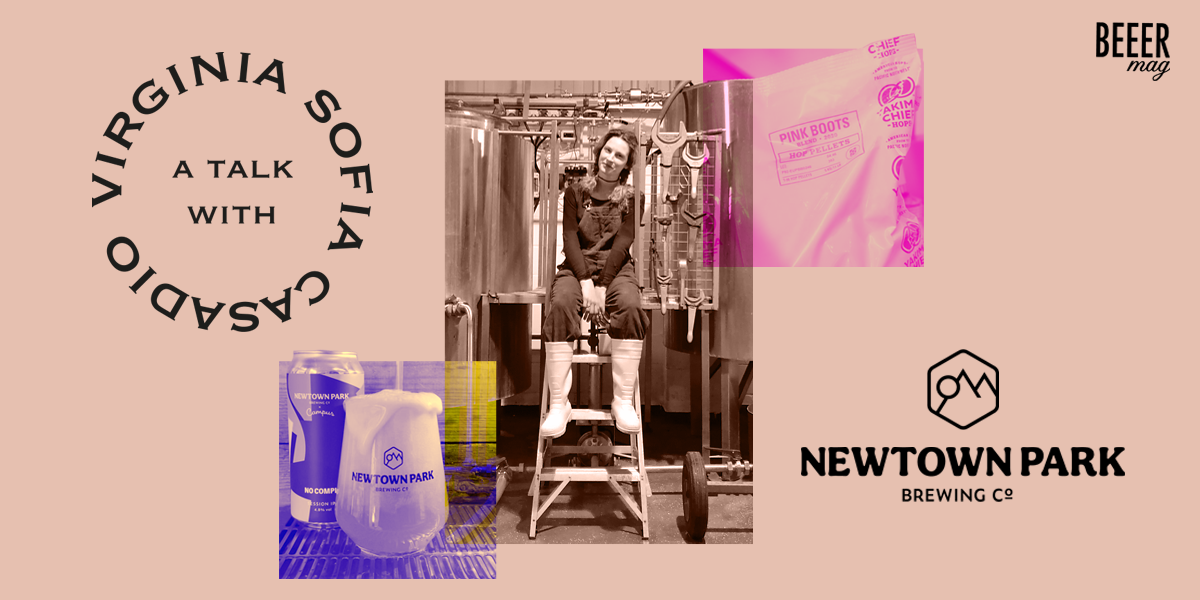 The experience of Virginia Sofia Casadio represents a concrete example that overturns these assumptions and shows that an alternative narration is possible.

Virginia’s story is certainly fast and brilliant, succeeding, in just under four years after graduating from DIEFFE, to be hired as the Head Brewer of Newtown Park Brewing (here) in Bristol, but it is also the result of a path that has naturally been directed towards a goal precise, who has come to terms with the opportunities and compromises to earn them. As she tells us in an almost summer afternoon, in one of the few days in which she manages to disconnect from work where she is in an intensive production phase, the first meet with craft beer has transformed a large part of his life. Her way of drinking, which over time and drinking has become more and more precise, is that of conceiving beer through the first tests in the kitchen with a kit for beginners that led her to invest in a 100-liter plant. After graduation Virginia is in Venice to work in her mother’s art gallery and takes advantage of the low winter season to deepen her knowledge. It is in that period that, after a month spent in Sweden, at Strange Brew: «I worked in exchange for room and board, I wanted to understand what it meant to make beer professionally», she decides to join DIEFFE to get the diploma in brewery:

«My class was the first to have three women in it while the others were made up of men only. With me was also Marta Bergamo, a dear friend of mine, who today is the master brewer of Birra Follina and teaches in DIEFFE. It was a period that I remember with pleasure even if, from time to time, there was a few jokes from professors or other classes about why I was there, for example, and not at the bakery address or if I was there because my boyfriend he was passionate. They weren’t needed and didn’t please.»

Reverse habits. We talked about this at the beginning, introducing the experience of Virginia Sofia Casadio. Like all realities with a typically male tradition, finding places for women and minorities is not simple. This does not necessarily make the environment toxic but it makes it necessary to ask questions about its inclusiveness, about how to make it more open and more alive by removing any possible obstacle. This discourse also concerns Virginia’s own comrades and merges with the possibility of access for everyone (especially for the youngest) and to be able to test oneself without jumping from one internship to another, follow that apprenticeship that cannot last all life, and not having to leave the country as happened to Virginia: «During the academic career it was mandatory to do an internship, I decided to do as much as possible. The first was with BAV in Venice, then I went to Holland from Oersoep and then to England to Brew By Numbers. I wanted to find out if I could be suitable for this job and go from homebrewing to being professional. I chose to be a brewer, I quit my job in Venice and I started to apply in breweries. When I graduated the only thing I found was other internships, often unpaid or poorly paid. It is a classic that certainly does not concern only the world of beer but few, very few, of my companions today run a brewery where they have the opportunity to make their own recipes. In Italy it is not just a gender problem, it is also a problem of possibility, of being taken into consideration for one’s abilities and not because one is on a particular tour or because one accepts a work path that never seems to end ».

And if you had different opportunities, we ask Virginia, would you have stayed? «Yes», ​​she tells us without thinking for a moment «and, indeed, I don’t want to preclude myself from returning». 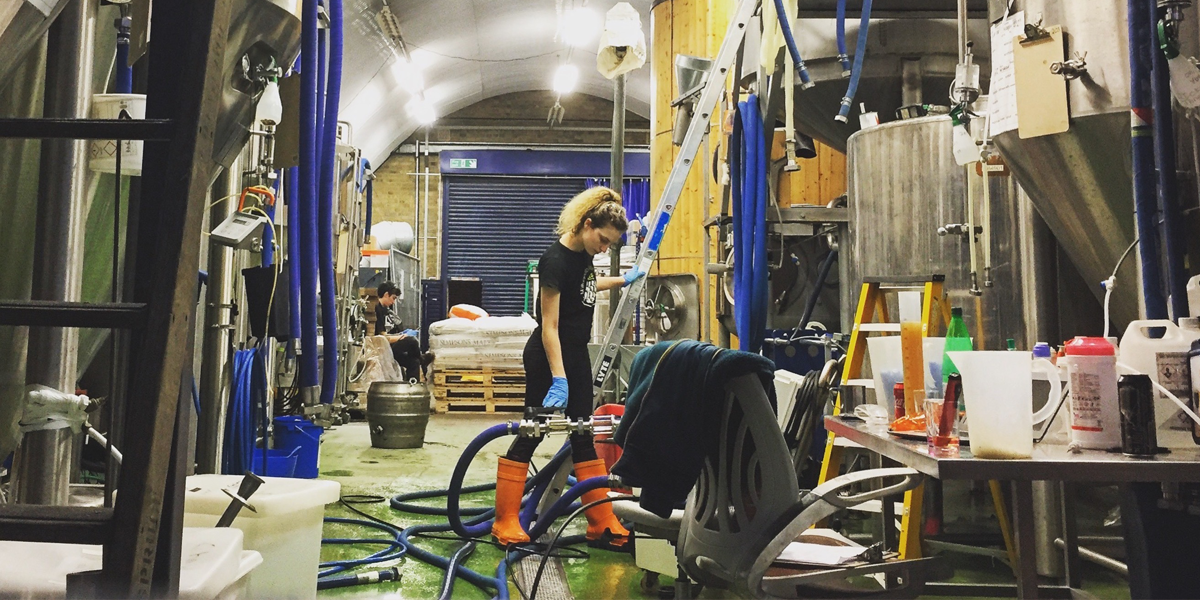 After graduation, a couple of English breweries, on the other hand, offer Virginia Sofia Casadio the role of brewer’s assistant, among them the choice falls on Moor Beer, the historic brewery in Bristol: «I was paid a little but it was a real full-time job, made of cleaning, hard work and hours upon hours from which I learned a lot. I continued for a couple of years or so, progressively increasing the responsibilities until I became the highest level member in production, after the Manager who had been there for 11 years. I didn’t assist the brewmaster, who would have been Justin, but I was a full-fledged brewer until I decided to quit.».  Virginia actually remains in the brewery for a few years, until – in July 2020 – she decides to leave the job she has earned with difficulty and not as a matter of opportunity:

«I stayed in Moor for a couple of years until I decided to leave. Working in that environment had become unsustainable for me, so I quit with no prospects or other plans to get out of it. I found myself being part of and accepting a hostile and toxic environment.»

On the experience at Moor Beer, Virginia wants to be clear: «I’d like to hear the truth about the brewery. He was certainly among the best breweries in Bristol when he came from Sommerset and I was over the moon when they offered me the job, many told me Justin was a difficult person, but I didn’t understand what they meant until I started working there. In my experience with Justin Hawke he was almost never present in the brewery, but he was often in Italy, Spain or around for events. This thing that he is recognized as the brewer is annoying to anyone who actually works in production. We brewers weren’t even given the chance to attend festivals and tap beers outside of Bristol. Before my arrival, he was even made to sign a contract with clauses that prevented him from working in other breweries for a full year after being fired. Justin was also brought to court by an employee, in the UK his behavior is known as opposed to in Italy ».

«The worst for me was during the first lockdown, where it was shown that our safety was not the priority. He changed our contract by forcing us to work 4 days a week instead of 5 to pay us less. The amount of work, however, was the same, and since everyone worked one day less, there was always a shortage of one person. Another guy and I resigned after two exhausting months to say the least. Since he already had a new job in a brewery while I didn’t, he was forbidden to go near the production plant and had to spend the whole month in the packaging department»

Fortunately, after this experience in Moor, two job offers arrive in a short time, including that of Newtown Park Brewing which ahe has decided to accept. Virginia’s first adventure as a Head Brewer at Newtown Park Brewing comes at the worst of times. The breweries are practically closed due to Covid and the consumption of craft beer in the UK has returned to the levels of 2017 despite the boom brought about by online sales: «There was a lot of tension and a lot of fear before leaving, I spent the summer trying and try the beers again, write recipes and look for what I wanted to do. The plant only started in November and for Christmas we already had three beers. It went very well, we won an emerging beer competition that will take us to most of the English summer festivals organized by We are Beer..»

It is also a question of mentality and how this can be affirmed here. In Italy craft beer is still a young culture, we have talked about it and everyone is talking about it the same way, and it is profoundly different from the UK, as Virginia also points out several times. The perception moves between millimeter differences, between traditional breweries, which produce their own classic bestsellers, and the new waves of microbreweries which, on the other hand, manage to represent a breath of fresh air. Not for this, however, continues Virginia, UK culture is free from defects or extreme situations as she herself has experienced: «There is certainly more interest, more attention to diversity, more reasoning around cultural impact but it probably still takes some time for these talks to be with us. I feel lucky for what I live here which, all in all, makes me feel accepted and respected for what I do».

Newtown Park Brewing is a young brewery, led by a female majority who, together with Virginia Sofia Casadio, is also led by Lara Light-McKelvaney, owner together with her husband Michael. Let’s talk to Virginia, then, about the production aspect, the work and the research that led them to have four beers (All Day Long, Come Alive, Emerging from the Mist and Level Up): «We started preparing ten beers in a garage in the waiting for the brewery, from which we then selected the best ones to develop. With this work I like that my creativity is continually stimulated and taken into consideration. Let’s think together about which beers we would like to make and how to make them, whether to start from something classic or something new, about which mouthfeel to leave in those who drink it. I try to limit the bitterness, thinking about what I want to achieve. Somehow you always start with a taste or what character you want to give to a beer, then work with percentages on the ingredients to find the right balance».

To close, together with Virginia, let’s go back to that topic from which we started which, after all, should be everyone’s. How would you like craft beer to be?

«I would like the differences in craft beer not to be noticed, that it was simply natural and it didn’t really matter who is making it, that preconceptions about genres do not determine the choice but are the bridge to new opportunities. I would like drinkers, those who hang out and work in this world to understand that some attitudes can be offensive, that they can truly understand and, at least, apologize after realizing that what they do can make it difficult or hurt others.»

Update June 26, 2021: We have tried to contact Moor Beer to give him space to reply and / or comment but, to date, no one has answered us yet.