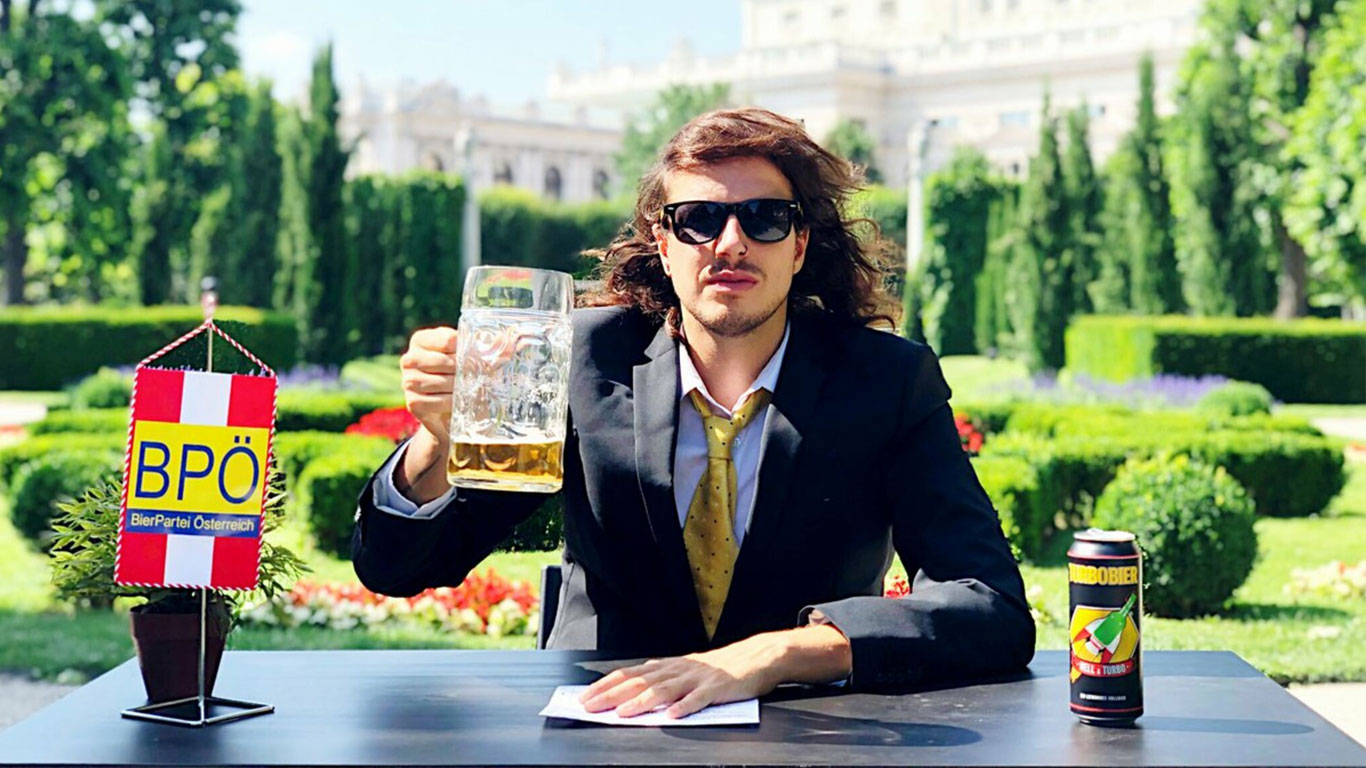 Marco Pogo, the leader of the Beer Party who took 2% in the elections in Austria

How cool would be a world where beer is passed on by the state as a kind of citizenship income? It must be what Marco Pogo thought before founding Bierpartei, literally the Beer Party which, in the last administrative elections in Vienna, won 2% of the votes (about 13 thousand votes), winning 11 seats in the various areas of the capital of Austria. What started out as a game, in the halls of underground clubs – Marco is the singer of the punk rock formation Turbobier – then turned into a full-fledged election campaign, gradually grinding people’s support.

In addition to the stated goals regarding a beercentric state, such as the installation of a huge beer fountain in the Austrian capital or the distribution of 50 liters of beer per inhabitant – a discourse on aggregation moves in the Beer Party program as cultural and independent tool. Not surprisingly, one of the main points of the struggle of the Bierpartei is the criticism of the allocation of public funds in the city of Vienna, which are invested largely for institutional sites such as the State Opera, while smaller and more independent realities are left to themselves, standardizing the cultural offer of the city. We let Marco Pogo tell us the story of this party, how it was born and how beer can be an instrument of political change.

It all started with a song I wrote a couple of years ago, called ‚Die Bierpartei‘.

With these words Marco Pogo begins to tell us about the birth of Bierpartei which, as you will guess, has such incredible contours as to break into the field of legendary stories born around a beer: «I shot a video with my band Turbobier for this release. In need of political posters, I started to design some, and later on registered the ‚Bierpartei‘ as an official party. And so it began. In the following years, I basically used every single turbobier-concert for holding a short political speech and promising the audience that I’m going to be chancellor really soon.»

We then ask him why to use beer to create a political idea: «It’s not strange – I think it’s beautiful. Beer is a wonderful thing, a great stimulant, a social enhancer, the lowest common denominator. I use beer to deliver my political ideas, plain and simple.» Beer is an incredible social aggregator, a fixed and necessary presence at every outing and, these days, a kind of container of humanity to defend. How does the Bierpartei plan to obtain it then? What are the proposals?

«My flagship initiative is the following: I wanna build a fountain that runs beer here in Vienna. A real fountain filled with beer will raise the life quality of people living in Vienna to the maximum. Furthermore, it will attract people from all over the world. I see this concept as a possible spot for cultural interaction. And this is my second important demand – I want to safe Vienna’s cultural plurality. In times of a pandemic and crisis, we must not forget that music, culture and art is not a matter of course». 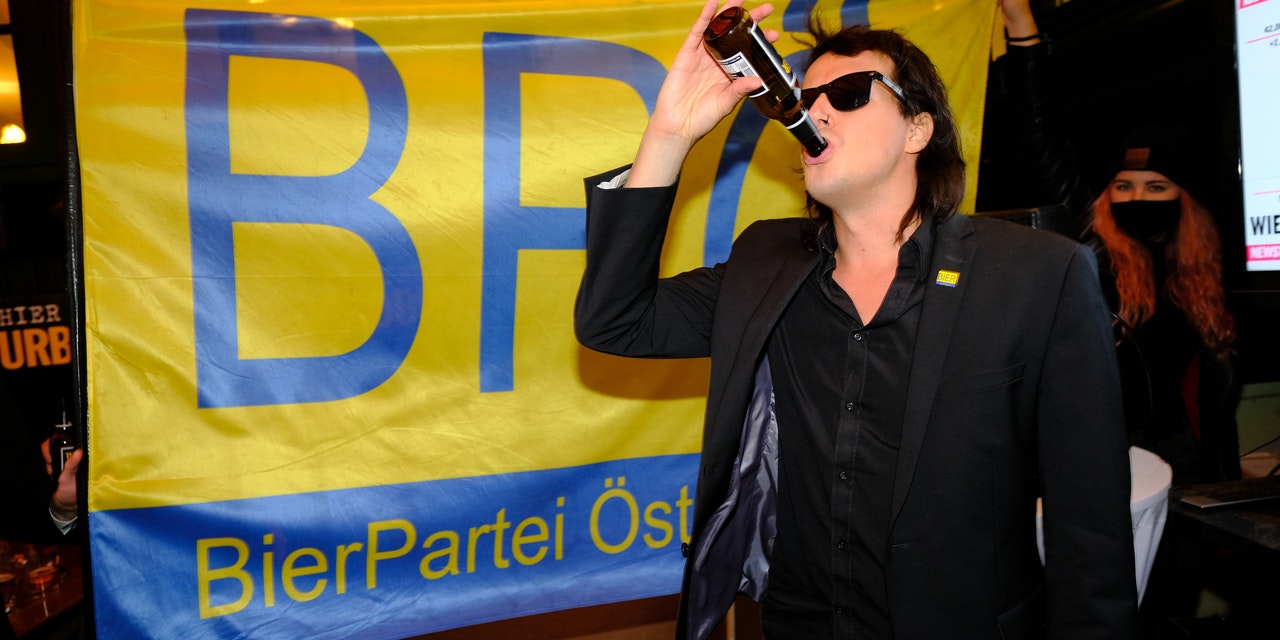 As we said in the Bierpartei are coexisting two souls of vindication merge, happiness and culture, precisely in a new climate of Viennese secession in which armies challenge each other by uncorking beer from the sides. In short, Diy or Die: «Being an independent artist for years now, it truly helped me with improving my creativity, also on a political level. You don’t need huge budgets or loads of money when you’ve got good ideas. I think that the success of my beer party is a great signal for the democracy and also a great signal, that you can join the political process on your own». In the underground of Wien this idea begins to make its way and Marco Pogo begins to understand that he is no longer the only one to have certain opinions and that they can have a value: «In the first couple of years, I didn’t really plan to run officially for election. That quickly changed when Austria held a re-election in 2019. I needed to collect a couple of hundred supporting statements and all of a sudden, I found the ‚Bierpartei‘ on the ballot paper. This year, for the election in my home town Vienna, I did it way more professional, collected with the help of my friends and fans almost 5.000 supporting statements. It was a great summer».

Especially in difficult times, you must not lose humor and joy in life. For me, beer is fun and entertainment and my voice for spreading my political ideas. Sometimes you need some kind of megaphone to get your ideas heard.

This enthusiasm and this support led them to take all those votes, exhibiting total simplicity and using a unique communication tactic, in which Marco Pogo found himself in the square serving beers, making speeches, music videos and TV interviews: «Well, in a couple of weeks, the city council will hold the swearing-in ceremony (it’s going to be a huge party, I’m sure) and then me and my team can start with the first motions in the districts parliament. Exciting times ahead!». But first – necessarily – the party. We then ask him how he celebrated at the news of the results, thinking that out of nowhere they found themselves in opposition: «Due to the current situation regarding the Coronavirus, I couldn’t hold a huge party, but still, I gathered with friends and supporters and we basically drank beer all night, when the results came in».

Marco Pogo’s Beer Party is part of those stories of the movie Slevin, in which one looks one way and then goes the other, of those forces that are sometimes incomprehensible but which use a metaphor to remind us of how important it is to defend one’s own independence and how much easier it is in front of a beer (or more). Better if Turbo.